§1. What is a circuit breaker

In addition, circuit breakers need to carry large currents and have very strict requirements for reliability and stability. Compared with semiconductor devices with leakage and reverse leakage, circuit breakers generally use mechanical switches.

§2. What are the structures of the circuit breaker

Protecting the main contact and extending its life is the main task of the contact system. The arc will damage the main contact and affect its ability to carry large currents for a long time. Therefore, components such as auxiliary contacts and arc contacts are required to guide the arc to the arc extinguishing chamber. 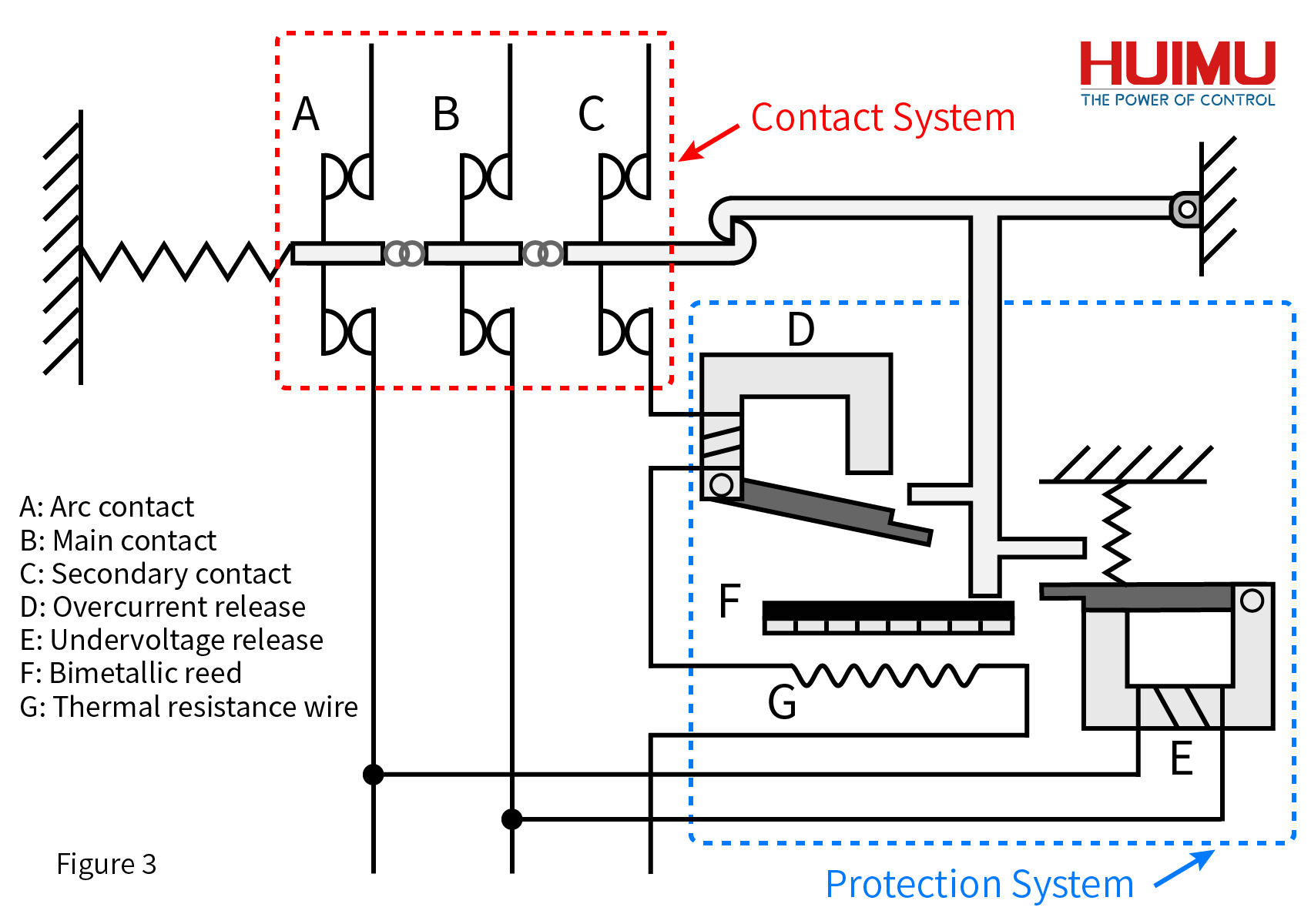 The auxiliary contact can also take on additional functions, such as alarming or sending a signal to the monitoring equipment after a breaking event occurs.

In the vacuum circuit breaker, the contact system has only the main contact, and its structure is shown in the figure below: 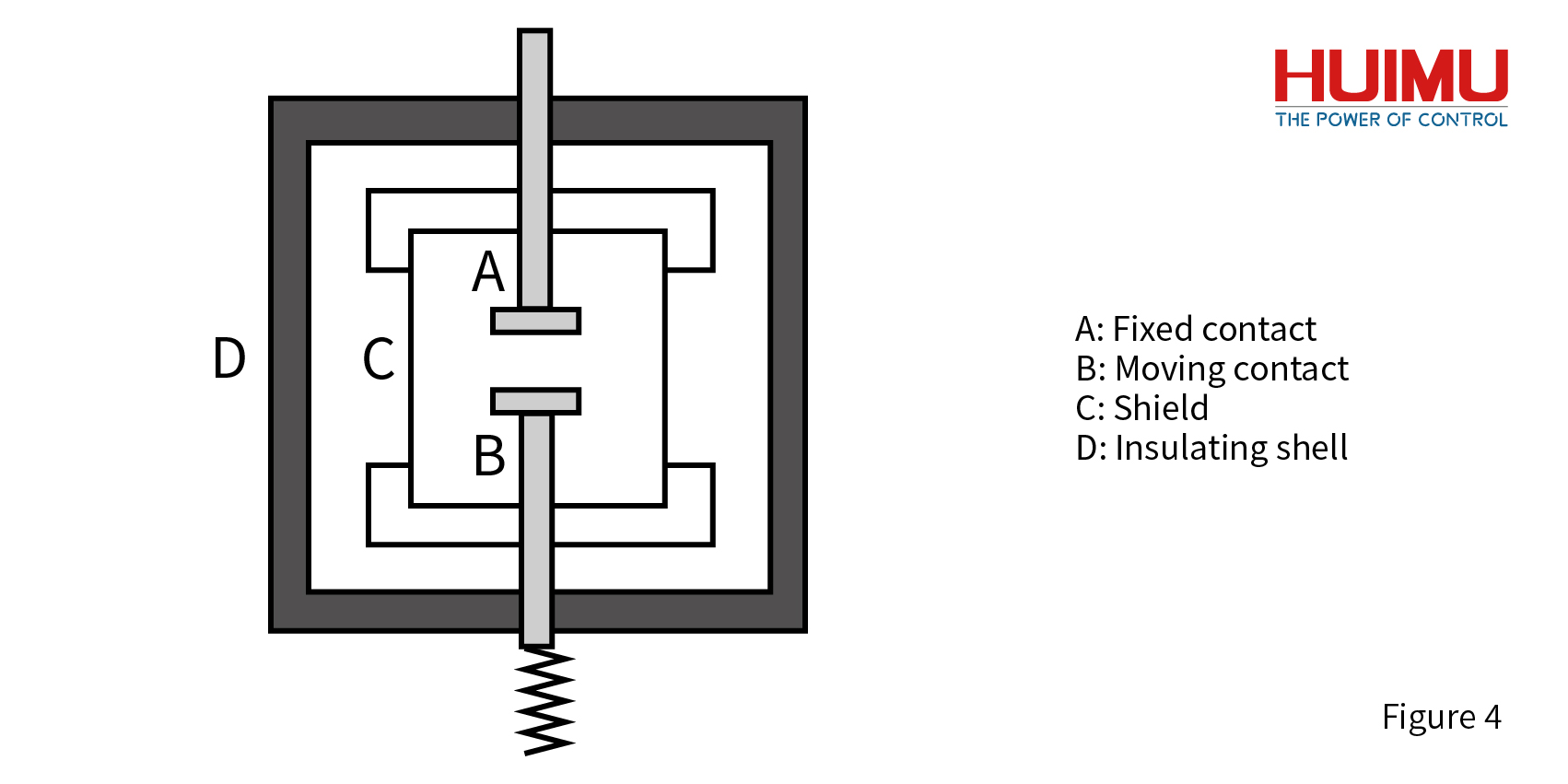 The following are common releases: 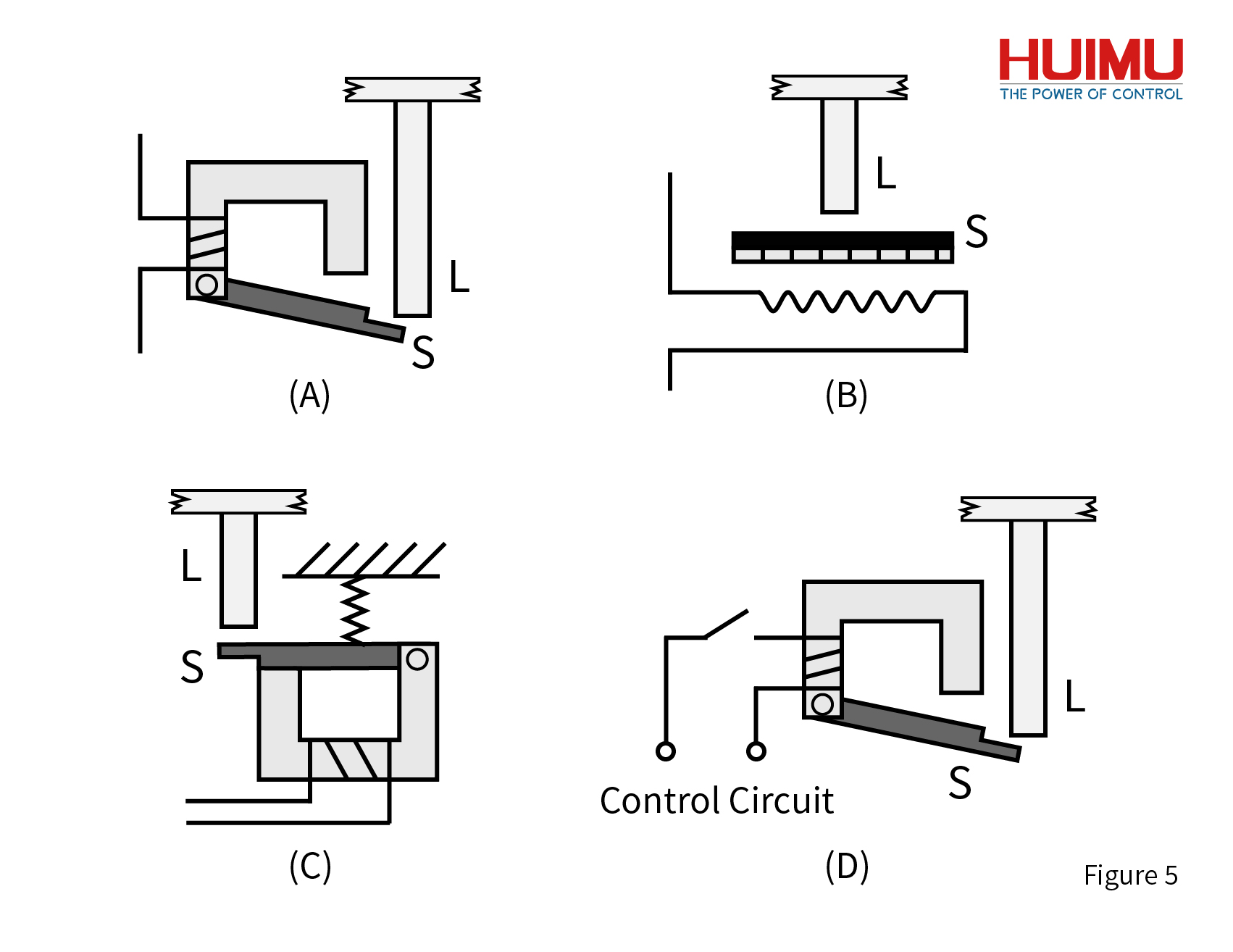 Overcurrent release (short-circuit release): As shown in Figure 5A, it is an overcurrent release, which is a kind of electromagnetic release. At any time during the work of the circuit breaker, if the load current is greater than the short-circuit trip current Im, the overcurrent release of the circuit breaker will trip. First of all, the magnetic field generated by the magnetic flux coil makes the iron buckle produce magnetic force. Then the magnetic force attracts the armature S to overcome the resistance and drive the movable rod L of the free release to move upward. Finally, the free trip unit trips, and the movable contact connected to the rod is driven by the contraction force of the spring to separate from the static contact.

Electronic trip unit: It can have all the functions of the above trip unit, and can be set in a certain range. The electronic trip unit is a circuit composed of a large number of electronic components, which can monitor the working status of the main circuit, and when an abnormal condition is found, it will push the free trip unit to perform a trip operation.

§3. What are the types of circuit breakers

§4. What are the parameters of the circuit breaker

The rated voltage (Ue) is the voltage that can maintain the circuit breaker to work uninterruptedly.

The short-circuit relay trip current (Im), when the load current value is higher than Im for an instant or a short time, it will trigger the short-circuit protection trip and break the circuit to avoid burning the load. Its value is generally 1.5 to 11 times In or 2 to 10 times Ir.

Operating short-circuit breaking capacity (Ics) refers to the short-circuit current that can be repeatedly closed and broken under certain conditions.

The short-term withstand current (Icw) is the current value that can maintain the circuit closed in a set time of 0.05s, 0.1s, 1s, etc., before the breaking operation is performed when the load current reaches Icw.

Power refers to the power when the circuit breaker is operating normally under the closed state.

Closing time refers to the time it takes from the execution of the closing operation to the time the contacts are fully closed.

§5. The working principle of the circuit breaker 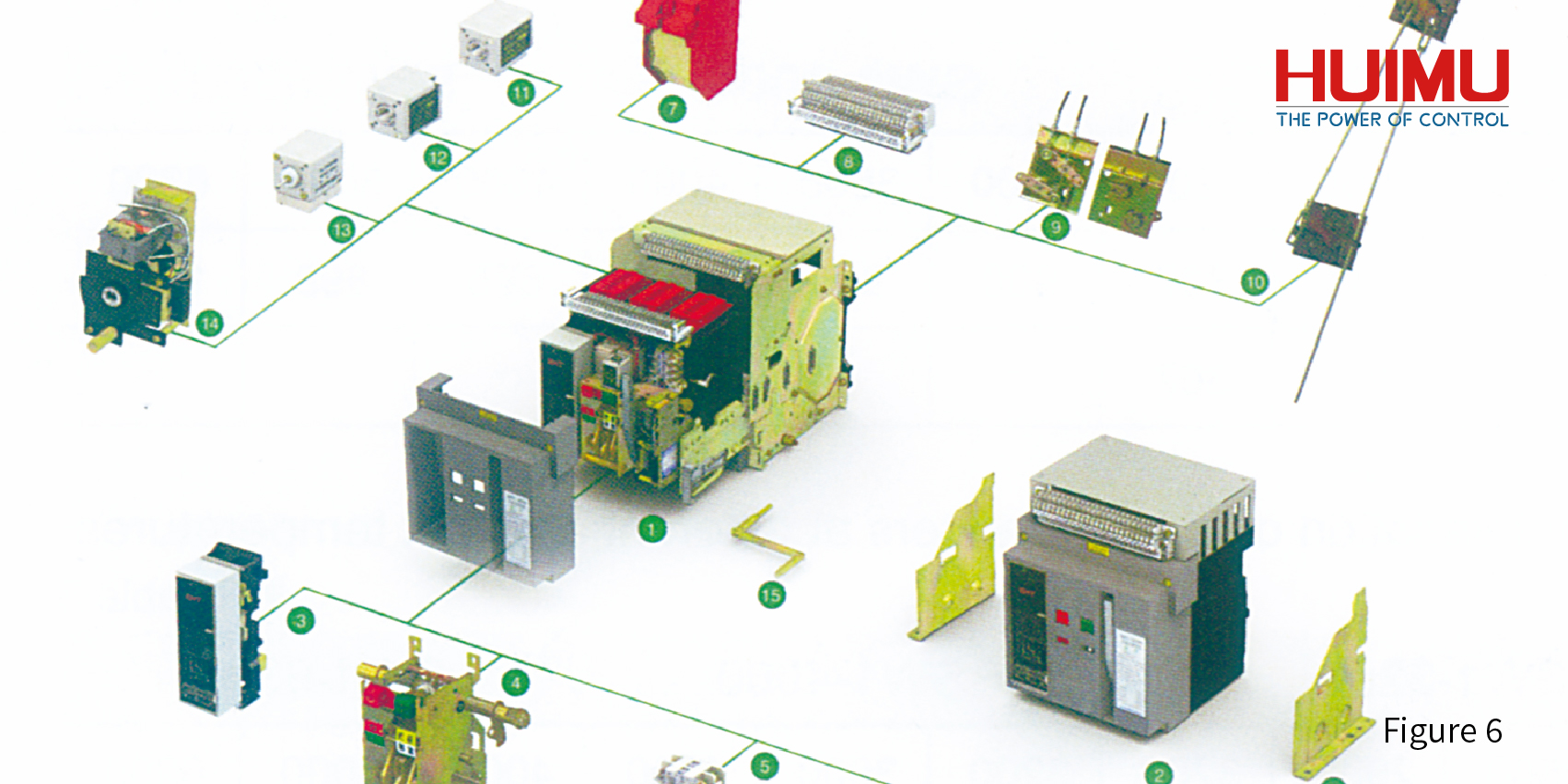 How the air circuit breaker works

Air Circuit Breaker, also called Air Switch, is a circuit breaker that uses air as the arc extinguishing medium. (As shown in Figure 3)

① The circuit at the arc contact is closed, and the under-voltage release starts to work. When the voltage at both ends of the release is greater than 0.85 times the rated voltage, the closing operation will be performed ②;

②The circuit of the auxiliary contact is closed, and the overload release starts to work. Only when the load current is less than the overload trip current can the closing operation be performed ③;

③The main contact is closed, and the protection functions of other releases are activated.

①The protection function of any trip unit is triggered, and the circuit breaking operation is started;

② The lock hook is tripped, and each contact is disconnected one after another under the traction of the spring;

③The main contact is broken, and the surge generated by the breaking is guided to the circuit where the arc contact is located through the circuit of the under-voltage release;

④The secondary contact is broken, and the surge generated by the breaking is guided to the circuit where the arc contact is located through the circuit of the overload release;

⑤ The arc contact is broken, and the surge current generates an arc after it is broken, which disappears in the arc extinguishing chamber.

How the vacuum circuit breaker works

①The under-voltage release detects whether the voltage meets the starting conditions. When the conditions are met, it is closed and operation ② is performed.

②The main contact and static contact in the vacuum interrupter are closed, and the external circuit is turned on.

②The main contact and the static contact are disconnected, and the external circuit is disconnected and an arc containing dotted ions is generated at the same time. Charged ions diffuse rapidly in a vacuum environment, and the arc disappears.

§6. What are the applications of circuit breakers

Circuit breakers are often used in equipment that distributes electrical energy to prevent accidents of a single electrical device from affecting other electrical appliances. It usually appears in equipment such as substation boxes and switch cabinets. The following are the main application places.

There are many electrical equipment in modern houses, and the power of all kinds of electrical equipment is different. The traditional use of fuses to protect household appliances and cannot meet people's needs. In addition, the fuse replacement operation is extremely dangerous. Therefore, various air switches are used to protect different power-consuming areas. The air switch is easy to reset and can be switched on and off repeatedly.

When the motor is working, it will encounter various situations, which will cause the motor to overload, under-voltage, overvoltage and so on. Motor equipment is generally very expensive. Therefore, the corresponding DC and AC circuit breakers are required to protect them to prevent them from burning out when encountering extreme conditions.

Many high-power devices will generate extremely dangerous leakage currents on their surfaces or upstream and downstream circuits during operation. Under normal circumstances, a leakage relay is used to continuously neutralize the leakage to ensure the working safety of the equipment. However, some leakage circuit breakers are still needed to preventively protect the extreme leakage current that may directly burn the equipment. Such as Metal-enclosed Ring Main Unit Switchgear, High Voltage Shunt Capacitor Compensation Switchgear